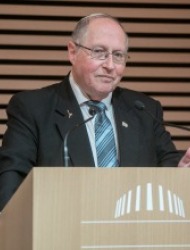 Justice Elyakim Rubinstein, Deputy President of the Israeli Supreme Court (Ret.) is an adjunct Associate Professor of Political Studies and Public Policy at the Hebrew University of Jerusalem.

Professor Rubinstein is an author of books and articles on the Arab-Israeli Conflict, the Supreme Court in Israel, Israeli history, and public law.

Professor Rubinstein is a former Attorney General and Government Secretary,as well as a former peace negotiator with Egypt,Lebanon,Jordan,the Palestinians and Syria. He is currently involved in preparing a wide memoir ,covering his years in Government and in particular in the peace efforts,and his years on the Court.He is involved as well  in a number of public voluntary activities.